Together, working toward a Strong Economy to benefit ALL OKLAHOMANS!

A rising tide should
lift all boats

With the current price of oil and gas, money is flowing into the coffers of Oklahoma.  Let's take advantage of that intelligently, and set ourselves up for future economic success.  It starts by investing in public education, small businesses, and our workers.

Bringing people back
to the table

Our government must allow all Oklahomans to voice their concerns and opinions.  I will bring the native tribes, along with other citizens, back to the table.  And being backed by deep-pocketed lobbyists will not be a requirement!

Our executive branch has been known to cut backroom deals for pet projects.  These have cost our tax payers hundreds of millions of dollars with little to show in return.

A native of Belgium, Charles moved to America as an exchange student. After graduating in Finance with the highest GPA in his class, he embarked into what would become a more than two-decades long adventure in Banking and Finance.  He currently lends money to municipalities throughout the Great State of Oklahoma.  Because the bonds he manages have the highest credit rating in the country, his borrowers are able to borrow money at lower interest rates than the capitol can, generating millions of dollars in savings every year.

Charles is the only Certified Public Funds Investment Manager in the race. He is also the only banker in the race whose practices were not called "unsafe and unsound" by the FDIC.  He looks forward to returning transparency, financial stewardship, and sound investment practices to the capitol.

Charles lives between OKC and Jones with his wife Eileen, his in-laws, and two of his three kiddos.  Child number one recently began college life at the University of Oklahoma.   A proud Christian, Charles believes that Loving Your Neighbor begins with being accountable to all taxpayers for every dollar spent or earned.

What is a State Treasurer?

The State Treasurer can be considered Oklahoma's CFO.

Along with tracking economic data and working on all things financial, the treasurer is responsible for managing an entire state agency and for making financial and economic recommendation to the legislature.  As a member of the state's Executive Branch, the treasurer works closely with the governor, lieutenant governor, and more.

Charles has the background, passion, and credentials necessary to serve the people of Oklahoma, give recommendations to the Legislature, and guide the executive branch through a path that is more transparent and effective than we have experienced over the past few years. 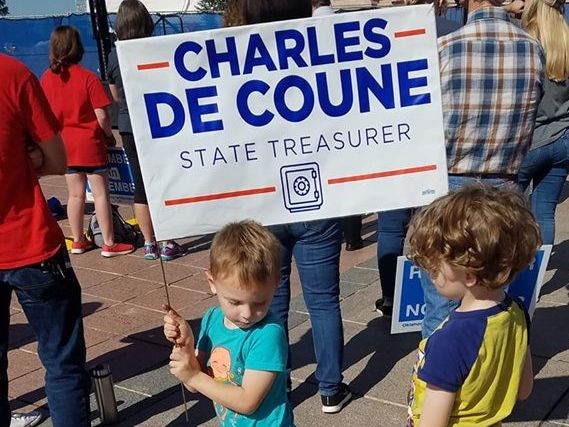 DONATE NOW
There was an error submitting your message. Please try again.
Thank you! We will get back to you as soon as possible.

Authorized and paid for by Charles 2022